by Joyce Elena Gibbons, Transcriber Tuesday 15th June 2021
Orphan girls in the refectory of a hospital [the Foundling, London], proceeding to their place at the table.’ Oil painting by Frederick Cayley Robinson. Credit: Wellcome Collection

As a volunteer transcriber for the Voices Through Time: The Story of Care project, I am uncovering the health stories of so many Foundling Pupils in the pages of the archive. This is because we are transcribing the infirmary records, which are a window into the challenges faced by the children. In my first blog, I recounted the stories of three young boys that may have had to experience surgery in a pre-anaesthetic world.

In this blog, I explore the lives of three children who each experienced recurring issues and diseases.

While transcribing, there have been times when I have been uncertain of what a diagnostic term meant. Take for example the case of John Cornwallis, a child diagnosed with ‘an inflamed Eye’ in November 1765. Three months later he was deemed a case of ‘opthalmy’ which, according to Samuel Johnson’s Dictionary of 1755, was

‘a disease of the eyes, being an inflammation in the coats, proceeding from arterious blood gotten out of the vessels and collected into those parts.’

– A Dictionary of the English Language (1755), Samuel Johnson*

If ‘opthalmy’ is interpreted literally, it would seem that poor John Cornwallis’ condition had degenerated into an actual disease over the winter of 1765-66, but perhaps the varying diagnostic terms simply reflect different medical views that were offered on the same child with the same condition.

It is one of those ambiguities that, at this distance in time, we may never fully fathom …

One of the most impactful case stories I discovered was that of Judith Frost. I found references to a few children noted as having suffered a ‘burn’ at different times – among them our first mention of Judith, in April 1763.

Judith reappears in the records almost a year later in March 1764, where she is described as having ‘St Anthony’s Fire’ or erysipelas, which we now know would have been caused by ergotism (the eating of baked goods made with fungi-infested flour). Some of the symptoms included mental disorientation, burning sensations in the limbs, lymphedema, and dry gangrene in the extremities.

One wonders whether she contracted this while living with her ‘wet nurse’ or foster family in the country, given that her case is a lone one.

Poor Judith resurfaces in the records yet again in February 1766, where she is now described as suffering from ‘excoriations’, a skin picking disorder. Could these have been triggered by the neuropathic pains she had already been enduring? This obsessive disorder involved repeatedly scratching parts of one’s body, often to the point of bleeding.

It is possible that Judith Frost’s time in the country (like all Foundling pupils, she was sent to foster parents until the age of five) might have exposed her to ergotism, and obsessive scratching, in the first place.

And yet it is likely that she was probably sent out again to the countryside for treatment. Around 1764-65, the governors seemingly decided in favour of sending many such children out to their ‘wet-nurses’ or foster parents in the countryside to recover. This decision might have been taken in response to the overwhelming demand of having so many children under the age of 10 at the Foundling Hospital during that season – children who had been accepted during the five-year period of ‘general admission’ (1756-1760), when the Hospital had admitted all healthy babies in exchange for government support. By 1765-66, these were all growing children. 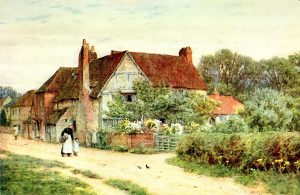 The records show that 50 children were sent out to the country ‘for health’ in late 1765, with at least 56 being sent off in December 1765 and 56 in February 1766. Here they could at least receive more individualised care and attention, presumably improving their emotional health and strengthening their immune systems in turn.

Even if this kind of ‘rural rehabilitation’ didn’t help Judith to overcome her obsessive skin picking, she might have been temporarily cared for there in a more personlised way than was then possible at the Foundling Hospital, where she would be competing for attention with hundreds more children in her time of need.

Some of the patients are sadly unnamed, yet their stories are far from forgettable. One young girl was recorded as suffering from leprosy in spring 1762 – and it must be remembered that babies with symptoms of leprosy were among those categorically excluded from the Foundling Hospital in the first place.

She was made to drink ‘Powis Well Water’ as a cure, which a newspaper advertisement of 1754 described as follows:

Powis Wells by the Foundling Hospital. These waters are now in their full perfection. They are of a sweetening, diuritic, and gently purging quality, and are recommended by many eminent Physicians and Surgeons for the cure of breakings out, sore legs, inflammation of the eyes, and other scorbutic and leprous disorders, &c. Those who send for these waters are desired to take notice that the Bottles are sealed upon the cork with the words ‘Powis Wells Water’**.

One wonders: how had she contracted the disease? Although not highly contagious, it can spread through contact with an infected person’s coughed or sneezed droplets.

This young girl was probably quarantined away from the other children on the discovery of her illness. One hopes that she did not have to suffer doubly for her illness through prolonged isolation.

No doubt the infirmary staff did their best to protect their charge from stigma associated with leprosy, and perhaps it is in this last clue we find a reason for her not being named in the records.

*https://johnsonsdictionaryonline.org  Also Edward Moore Noble’s later publication, A treatise on opthalmy; and those diseases which are induced by inflammations of the eyes. With new methods of cure (1800).

** ‘Some lost wells and found wells of eastern central London’, posted by pixyledpublications on https://insearchofholywellsandhealingsprings.com/2012/06/21/some-lost-wells-and-found-wells-of-eastern-central-london/
Powis Wells’ location has been lost to us, but according to the Rocques map of 1747 would have been around Guilford Street (behind the Great Ormond Street Children’s Hospital). Powis Street nearby was named after the well. http://www.davidfurlong.co.uk/holywellslond.htm

From family discovery to Half Marathon: How my mum’s Foundling Hospital heritage inspired me to support Coram