In Autumn 2020 I joined the Coram ‘Voices Through Time: The Story of Care’ project as a volunteer transcriber, little knowing how much the records would reveal to attentive eyes. I was quickly drawn into the world of the Foundling Hospital in the mid-18th century, in particular its infirmary, whose records were among the first I transcribed.

The Foundling pupils were usually described in one or two words only, simply by a name or a number. Yet to think that each beautifully manuscripted name on the page represented a whole life …

Who were they? How did they live? What was it like to be ‘in their shoes’, especially when ill?

In this blog series, I piece together recurring names or ailments, and a fragile but fixed picture emerges in many places. They help to cast a spotlight on ten young lives from the Foundling Hospital’s earliest years.

In the first of my blogs, I explore the lives of three boys, through the records of their treatments and surgeries.

In April of 1763, young James Butler was noted as having an unspecified ‘tumor’. His was the first such case I came across, although I found three more children recorded as having had a tumor at one point or another.

In the mid-18th century, the Foundling Hospital had an apothecary at hand to make weekly reports of the children’s health. Whenever they needed a more expert opinion, they were quick to consult leading medical specialists in London. High-profile surgeons like John Hunter (1728-1793) recommended treating tumors with techniques like ‘compression of the tissue’ instead of surgery whenever possible*.

It is hard to know whether James was treated with either compression or surgery since the records do not mention either. He was however almost certainly treated with the customary ‘wholesome diet, rest, and the need to escape the sorrows or the sad passions’ that was prescribed as a basic course of treatment.

The next year, between March and June 1764, little James was not yet ‘out of the woods’: he was recorded as having developed ‘scrophulous’ symptoms.

Scrofula, sometimes known as ‘the king’s evil’, was caused by tuberculosis bacteria infecting parts of the body outside the lungs, in particular the lymph nodes which would become swollen and irritated. We can only hope that his absence from subsequent infirmary records means that, after a tough childhood, he eventually recovered full health.

Eliah Booth was another child who reappeared in records spanning some years. From January 1762 until as late as June 1764, Eliah had a ‘stone in the bladder’ – an issue which at the time was often treated through lithotomic surgery.

Today, bladder stones are more commonly an issue reported in developing countries, since a lack of vitamin A and B complex in the diet can result in chemicals forming crystals and bladder stones.

According to Foundling Museum research volunteer Thomas Aird, who has extensively studied such records, there was at least one incident around this time when this kind of surgery went disastrously wrong, resulting in incontinence for life and the need for life-long occupational support**.

Indeed, Eliah Booth was ‘cut for the Stones’ in June 1764. It is unclear how he managed after this surgery since I could not find further information on him. Let us hope ‘no news was good news’ and that, after three years enduring this painful condition, this operation was a turning point in his recovery. 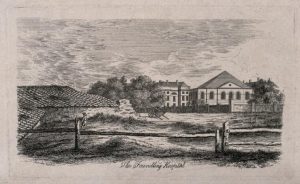 The Foundling Hospital: the main buildings seen from the north, with a farmyard in the foreground. Engraving by J. P. Malcolm, 1808. Credit: Wellcome Collection

In May 1764, young Thomas Langton’s life was changed forever when his left leg was amputated. The fact that this is recorded a full month after the operation suggests that not only did he survive the gruelling ordeal, but must have made a recovery one way or another – he is not mentioned again in any other records that I transcribed.