Music was an important part of the Foundling Hospital from its early days to its closure in the 20th Century. Children sang psalms, hymns and anthems and were encouraged to learn an instrument and join the Hospital band or orchestra. Musical performances were given to raise vital funds.

Additionally, music was a route to success for many children, such as Charles Nalden. Born in 1908 and brought to the Foundling Hospital by his mother at just three weeks old, Charles took up the cornet and joined the school band. As a teenager he was offered a position in an army band, and he went on to become a successful bandmaster before gaining a doctorate in music from the University of London. He became a Professor of Music in New Zealand and was awarded a CBE for services to music. 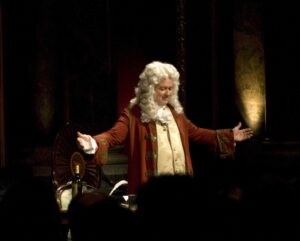 From our Handel concert in 2010

In 1749, the Baroque composer and creator of Messiah, George Frederic Handel, offered to stage a concert to pay for the Chapel at the Foundling Hospital. He’d heard about Thomas Coram’s efforts to provide a home for vulnerable, abandoned, children and wanted to help. To commemorate this we hold an annual Handel Birthday Concert every February to celebrate the composer’s birthday.

Music has continued to play an important part at Coram well into the 21st Century.  In 2014, a number of top artists including Bryan May, Sophie Ellis-Bextor and Lily Allen performed in Coram’s biggest-ever fundraising concert held at The Royal Albert Hall to mark our 275th anniversary. And in our Creative Therapies work, music therapy helps vulnerable children communicate and express their feelings.

Explore Coram and culture on our story of care timeline

Handel in our archives

Charlie Chaplin and the story of care