By Jasmine Bullock, Volunteer at the London Metropolitan Archives Monday 4th April 2022
A necklace given to Violet, a Foundling Hospital pupil, by her mother Alice

I have been volunteering with the London Metropolitan Archives conservation department since December 2021, and during this time I have been helping catalogue Foundling Hospital petition letters from the 1800s to the early 1900s. This mostly includes labelling petitions with their updated reference codes before they are digitised as part of the Voices Through Time project.

I was going through petition number 22711, labelling it with its new reference number. Initially, I thought this petition included photographs in it due to its thickness, but this wasn’t the case. Instead, I discovered a necklace wrapped in a piece of paper within an envelope. The envelope stated that the necklace was ‘left by Alice Stoffell on January 22nd 1901 for her child’. The necklace has a green stone with a cross attached to it on one side and it appears that there is some textile within a window on the other side. The necklace is stringed with pearls – potentially real but not likely considering Alice’s occupation as a servant – on a ribbon. 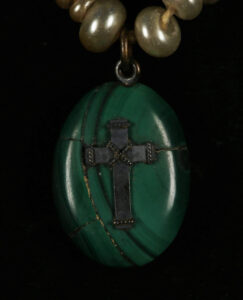 Close-up of the cross 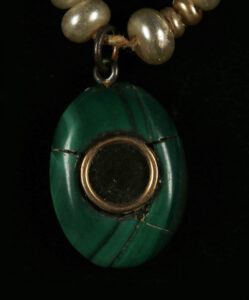 Close-up of the textile window

The envelope also included a shorter golden metal chain, which unfortunately was broken when it was discovered. At the time I found the necklace, I had already gone through 1,047 petitions and this was the first time I had come across a ‘gift’ like this left by a mother. Instantly I was excited, intrigued and wanted to know more about Alice.

The broken metal chain from the necklace

According to her petition papers, Alice Beatrice Stoffell was 19 years old when she gave birth to her daughter, who she named Violet Stoffell, on the 29th November 1900. In 1900 Alice was in the service of a schoolmaster named Mr Charles Wood. It was whilst working for Mr Wood that Alice met William Percy Jones, a 28-year-old assistant schoolmaster. They saw one another nearly every day at the school and William continuously asked Alice to ‘walk out’ with him – essentially date him – and she eventually agreed. One day he took her to a hotel where they had ‘cc’. The abbreviation ‘cc’ is mentioned in most petition letters, especially after the mid-1800s – it refers to sexual intercourse having taken place.

What is disturbing is that Alice mentions she went to this hotel with William once, and then again ‘under threat’ when ‘cc’ was repeated for a second time. This would suggest that William had assaulted her, an unfortunately common inclusion in petition letters. William promised to marry Alice at the time, but when she told him of her pregnancy, he said he was in no position to get married but would do all he could to support her. This did not happen. William invited Alice’s sister and parents to meet with him; he denied fathering her child initially but then admitted to it. After this, he simply disappeared. The last time Alice saw William was in May 1900.

Alice applied to have her daughter admitted to the Foundling Hospital in early January of 1901. Character statements were included in her petition. Mr Wood submitted a letter in which he confirmed Alice had been employed by him and that he always found her to be ‘strictly honest’. There was also a letter written by a third party who interviewed Mr Wood, Alice’s mother and grandmother. Here, Mr Wood mentioned that Alice was a ‘good servant’ and that he was ‘very sorry’ for her. He had no idea where William had gone after leaving his employment. Alice’s mother stated she tried to find William but had no luck. Alice’s grandmother, who worked as a housekeeper for Mr Wood, commented that she knew William and Alice were courting. This all helped to corroborate Alice’s story and therefore, after a committee decision, Violet was admitted to the Foundling Hospital on 18th January 1901. 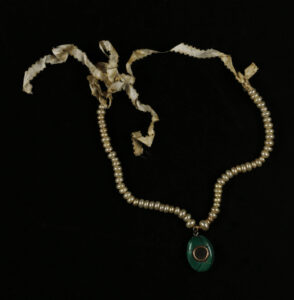 The necklace showing the textile window and pearls 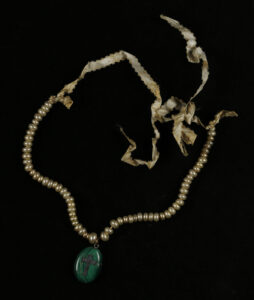 The necklace showing the cross and pearls

The date on the envelope containing Violet’s necklace shows that Alice came back to the Foundling Hospital, four days after her daughter was admitted, to deliver the necklace. It is reasonable to assume that Alice’s choice to part with her child was not an easy one, as she wanted to leave something for her daughter to keep. Unfortunately, it is clear that Violet never received the necklace. Violet was also given a different name when baptised by the hospital, as was customary, and so she became Emily Durrant. Violet didn’t retain any of the things her mother had given her, not the gift and not even her name.

This seemed heartbreakingly unfortunate to me but from all the other petitions I have seen, I understand that this was the case in many instances. Nevertheless, having an object with so much emotional weight attached to it really brought Alice’s story to life for me. It allowed to me to reflect on how hard it must have been for mothers to make such life-altering decisions that also impacted so many lives around them.

Keep an eye out for new highlights from the people who spend time with the Foundling Hospital archive in this unique regular feature. More to follow!