by Carol Harris, Coram Historian
Emma Brownlow, The Christening, 1863, © Coram in the care of the Foundling Museum.

This blog is part of our #RealStoriesOfCare series. It tells the story of Theodore, who was a pupil at the Foundling Hospital, England’s first dedicated children’s charity, in the 18th century.

Theodore Barrow was admitted to the Foundling Hospital in February 1760. He was just three weeks old and came to the Hospital with both his birth name and birth date: enclosed was a note describing him as ‘John Beard born January 19 1760’. He was admitted just before the end of four years of unrestricted admission, meaning that the person who left him behind, most likely his mother, did not have to justify why he should be accepted.

When John was admitted, a piece of cloth was cut from one of the sleeves of his gown. The note and the fabric were kept in the Foundling Hospital’s records as identifiers, in case his family wanted to come back and claim him – although sadly, this rarely happened.

When John’s admission billet was filled in, it was headed with his Hospital number and recorded his age and date of admission. A lead disc on a cord with his unique number on it was placed around his neck. This lead token, bearing the number 15514, was found with the original cord still attached with a letter in the Foundling Hospital archive. This the only remaining disc with its cord, and only one of two remaining discs of this period at all. 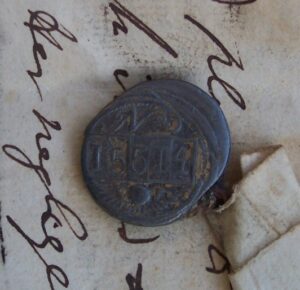 John was given the name of Theodore Barrow and placed with a wet nurse, Mary Bradford, in Ampthill in Bedfordshire on 12 February 1760. She breast-fed him and cared for him in her own household until he was about five. Both Theodore and Mary, along with any other children sent to the same area, were under the supervision of a volunteer inspector, Mr John Bolding. He had recruited Mary as a wet nurse, paying her wages each month, keeping her supplied with clothes as Theodore grew, and checking on her care of him.

In 1764, Mr Bolding wrote to the secretary of the hospital to say that Theodore had scald head, ‘which must have the hair draw’d or ye child ruined’. Scald head was ringworm, a fungal infection of the scalp, which mainly affects young children. It causes hair loss and these bald patches become inflamed and scaly, and in severe cases pustules develop. It is highly infectious and transmitted by close contact. The lesions can become infected by bacteria and cause further damage.

Return to the Hospital

The Hospital decided that Theodore should come back, and he returned to the Hospital on 4 December 1764. Mr Bolding wrote another letter saying that he was sending Theodore back with his nurse Mary, emphasising that she was a good nurse and that she was not to blame for the child’s condition. The cord and number attached to it were sent with the letter and remain pinned to them to this day, having been removed from Theodore, against all Hospital regulations, perhaps because of cord-rubbing was making the condition of his scalp worse.

Theodore did not go back to his nurse, but stayed at the Hospital, receiving a smallpox inoculation in July 1767,  before being sent to one of the Hospital outstations at Ackworth in Yorkshire on 7 September 1767 where he was prepared in a work environment for apprenticeship.

However, not every child made it out into the world. In 1769 the Governors’ sub-committee minutes referred to a list sent from Ackworth which included Theodore as one of about 50 children who had been judged unfit for apprenticeship. This was judged on physical assessment or other ‘defects or accidents’. These conditions were noted as: ‘idiot’, ‘dumb’, ‘short-sighted’, ‘rupture’, and in the case of Theodore, now aged 9, the description was ‘scald head’. There is no indication of whether he was still infected or whether his appearance, perhaps his baldness or scarring, was unacceptable. He returned to London in 1773, and remained there until 4 June 1777 when he was finally apprenticed and left the Hospital.