by Janette Bright, Historical Researcher
Foundling Pupils, like Samuel, from the 20th Century.

In 1800, the Governors of the Foundling Hospital reinstated a system for Foundling pupils who had successfully completed their apprenticeship, allowing them to apply for a financial award of five guineas. This reward system had been undertaken 40 years earlier with the last two recorded children to receive a reward (at that time, one guinea) in 1769. The Hospital’s Treasurer, Sir Thomas Bernard, believed that bringing back these gratuities would have a good ‘effect on the morals and conduct of the children’.

To receive their prize, children had to demonstrate they had been honest, sober and diligent, as well as avoiding bad company and profane language. A petition supported by the apprentice’s master or mistress was completed and sent to the Hospital for the Governors’ consideration. Many of the forms also include an assessment by the Hospital’s schoolmaster (for the boys) and the matron (for the girls) who may have visited the apprentice at their place of work.

Samuel Inman’s early life at the Hospital is yet to be fully researched. What we do know is that he was baptised at the Hospital in 1783 and given the number 17,859. After five years in the countryside with his nurse, he returned to the London Hospital in 1788 where he remained a further five years. He was sent out as an apprentice at the age of 14 years, and on completion of this in 1804, Samuel successfully applied for a gratuity, which was granted in December of that year. The then schoolmaster, Robert Atchison, provided details of an episode four years previously when there had been a minor dispute between the boy and his master.

Stepping into the publishing world

Samuel was one of two boys apprenticed to the well-known publisher and print seller, Rudolph Ackermann (1764-1835) of 101 The Strand in London. In 1800, after three years of apprenticeship Samuel had complained to the Hospital Governors that he was disappointed in the work he had been given by Mr Ackermann. It seems he had hoped to be trained as an engraver but instead was employed in Ackermann’s shop. He said that this was giving him ‘uneasiness of mind’. However, this dispute seems to have been resolved.

Ackermann must have been pleased with Samuel because in 1804 he requested that should Samuel remain with him for a further three years beyond the end of his apprenticeship, he would agree to set Samuel up in his own business. Ackermann very generously offered to supply Samuel with £200 worth of shop goods. He described Samuel as an ‘honest, sober and industrious man’ who ‘is now, and may remain as long as he conducts himself properly in my service’.

This was a very generous offer and most likely beyond what any Foundling pupil apprentice would have expected. While we do not know if Ackermann kept his promise, a Samuel Inman is recorded as a stationer and print seller for many years. His business was listed from as early as 1819 in several trade directories at an address opposite the Hospital gates at 7 Lamb’s Conduit Street. He is also found there on the 1841 census. At that time, it is noted that he was a widower. But by the next census of 1851 he had re-married. This census tells us that his new wife was Mary Ann, more than 30 years his junior. We can confirm their marriage because of his address – Samuel Inman married Mary Ann Tyler on 12 October 1844 at St Pancras parish chapel. Although Samuel gave his father’s name as John Inman (deceased) he would not have been the first Foundling pupil to hide his origins by doing so. We do not know if his family were ever told. 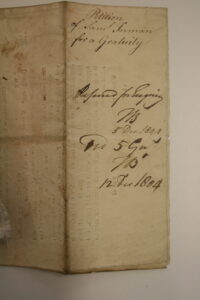 Samuel’s first wife was also called Mary. We can be reasonably certain of this because a Mary Inman of 7 Lamb’s Conduit Street was buried at St Andrew Holborn aged 52 years on 25 August 1839. And there is a record of a Samuel Inman and Mary Warren marrying on 17 January 1830 at St Leonard’s Shoreditch, which we might assume to be correct. No children have been found.

The last record we find of Samuel is his burial record at Kensal Green in 1853 which again references 7 Lamb’s Conduit Street. It is interesting to speculate why he chose to set up his business so near to the Foundling Hospital. Perhaps it gave him some sort of security and he may have visited the chapel and watched other Foundling pupils playing in the grounds he once knew so well. His shop no longer exists – the site is now the location of more modern buildings. However, whenever I walk up that street now, I like to think of Samuel perhaps selling one of the many images of the Hospital itself, his customer’s never knowing his connection.