Home Explore The Foundling Hospital in the 20th Century

The Foundling Hospital in the 20th Century

Foundling pupils, in the 20th Century.

The 20th century saw significant change for the Foundling Hospital and a gradual shift from residential to family based care.

The Foundling Hospital Report and Accounts for the year 1913 makes it clear that ‘children can only be admitted upon the ‘personal’ application of the mothers’ and that ‘no application can be received previous to the birth of the child, or after it is 12 months old’. In many ways, very little had changed in the previous 150 years, in terms of children starting their care with foster families and coming back to the institution at the age of five.

At the age of 15, boys became apprentices or enlisted for the army, often as bandsmen, and girls would go into domestic service. There were tailoring classes for apprentices and the boys’ band was very popular. In 1913, there were 75 boys in infantry and cavalry bands serving worldwide.

Girls made much of the children’s clothing, and repaired clothing and linen, and older girls were trained in dressmaking, cookery and laundry work to prepare them for their futures in Domestic Service.

Both boys and girls (separately) had swimming lessons  and older children formed the chapel choir, along with six professional singers, with the Sunday morning service open to the public.

Annual summer camp was organised each July, with 118 boys spending a month camping near Bognor Regis in summer 1913, and girls were able to go to camp the following year. 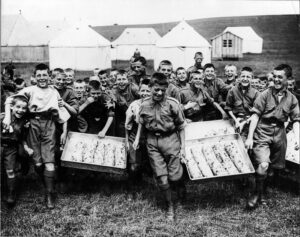 The coming of the railways and pollution, along with increasing financial pressures, prompted the Governors to consider relocating the Foundling Hospital to the ‘healthier’ countryside.

In 1925, the Governors sold the entire Hospital site to a property developer amid much local opposition. A voluntary committee of Children’s Playcentres was formed to preserve some of the site as public open space, today known as Coram’s Fields, where no adult is allowed unless accompanied by a child.

The Governors decided to temporarily relocate the Hospital to school buildings in Redhill, Surrey, in 1926, while a new, purpose-built school, closely modelled on the original Foundling Hospital, was built in the countryside in Berkhamsted, Hertfordshire.

Around 300 children moved from Redhill to the new school in Berkhamsted in July 1935, with a grand opening ceremony led by the school band and Messiah played on the organ that had been Handel’s gift to the original London Hospital.

Its design was almost identical to the original Foundling Hospital and featured some of the original furniture, including the pulpit, stained glass windows and old oak staircases. However, the large building was divided into separate dormitories each for 25 children, and the school had a concert hall, dining room, swimming pool and gymnasium. It was made up of a central chapel with two wings on either side – the boys’ school and the girls’ school.

The Governors, who were still based in London, decided to develop an original section of land in Bloomsbury bought back from Lord Rothermere. The 1936 Foundling Hospital Act broadened the aims of the charity, to include education and child welfare, and an infant welfare centre was opened for babies coming to the Hospital on the land in Bloomsbury (which is where the Coram Group of charities continues today).

In the lead up to WW2 and subsequently there was increasing pressure to review the Foundling Hospital’s model of institutional care. Foster mothers pressed to be able to keep their foster children when they reached the age of five, rather than send them away to the Foundling Hospital residential school. There was also increasing understanding on the part of professionals such as child psychiatrists of children’s emotional needs.

The World War Two period proved a particularly difficult time for the Hospital as teachers were called up to the military, income reduced and the annual summer camp, which offered a welcome break from the strict routine of school life, was stopped. Former pupils later describe a harsh regime, recollected by some as part of the Foundling Voices audio project.

After the end of the war, the Foundling Hospital began to allow the children to return to their foster homes during school holidays.

In 1948 the government passed the Children Act which established Child Care Departments in Local Authorities which assumed responsibility for providing a range of services for children and families. The Foundling Hospital established its own Children’s Department and employed its first Children’s Director, Delia Ashworth, a childcare specialist who was a reforming figure and later awarded an OBE. The department was staffed by qualified child care workers (specialist social workers).

In 1955, Coram became the first children’s charity to close as a residential home and to place all the children in it’s care either back with the foster families they had been placed with as babies, or were found new foster homes, an important transition to Coram’s future work.

Many features from the original hospital have been preserved at Ashlyns School, including the stained glass windows in the chapel, the beautiful staircase in the entrance hall and the carved fireplace in the old board room. Other original architectural artifacts can be seen by visitors to  The Foundling Museum, which opened at 40 Brunswick Square in 2004 next to the Coram main campus where the charity continues our work today. The Museum tells the history of the Foundling Hospital, as a children’s charity and first public art gallery.

Learning from evidence during the Second World War of the impact of separation and loss on children and responding to research from leading practitioners, the charity began to develop new approaches to childcare and education which emphasised children’s emotional wellbeing and the importance of life in a family.

In 1953, the Foundling Hospital became known as the Thomas Coram Foundation for Children. Under Delia Ashworth’s direction, the organisation moved away from the old model of institutional care and recruited foster families who were prepared to offer long term homes to babies who were received into the care of the charity. Based at 40 Brunswick Square (now The Foundling Museum), their role was to care for the babies for as long as this was needed – contact was maintained between the babies and their birth mothers, and some children were later able to return home. However many babies remained with their foster families throughout their childhoods. All the babies received into the care of the charity were the children of single mothers who were not in a position at a time when there was no public provision for single mothers. The charity regarded support to the mothers as being as important as that provided to the children and foster families.

This service was unique at the time. Being an unmarried mother was still regarded as shameful by society, and many families refused to support their daughters if they became pregnant.  For many mothers the only option was to give their baby up for adoption. Coram provided a totally different service, recognising a mother’s attachment to her baby, and giving her time to try to build a new life and reclaim her child.

By the early 1970s Children’s Departments in Local Authorities had widened their provision to include fostering and other services for single mothers, so this was no longer a specialist provision made by Coram. Accordingly Coram reviewed its programme and registered as an adoption agency in 1971. As an adoption agency, Coram chose to provide a specialist service to children who would otherwise not have the opportunity to be adopted. Coram’s services were offered to children in the care of Local Authorities, including older children and those who had additional needs or disabilities. Coram also accepted referrals of children for adoption from black and minority ethnic backgrounds and later developed a specialist programme to recruit adopters from black communities.

During the years following the closure of the old Foundling Hospital in Berkhamsted, Coram continued to support those who had grown up in its care. Those children and young people had had their names changed when they were received into the care of the Foundling Hospital. This was not merely a Foundling Hospital protocol, it was enshrined in the legally binding conditions of the original Royal Charter, designed at a time when there was a huge stigma about having baby out of wedlock to protect the identity of the mothers who had been assured that their identity would not be divulged.

However there was increasing pressure from former pupils to be given information about their mothers. Accordingly, Coram employed specialist staff to trace selected birth mothers at the request of the child (now adult). If these mothers were traced, they were informed of their child’s request for information, and depending on the mother’s circumstances and her wishes, some children were able to be reunited with her or given information. However many women had never revealed information about this child to their families or husbands, and felt unable to risk the possible repercussions of opening up this information. Without the mother’s permission it was not possible to give the former pupils any information about their origins.

The Adoption Act 1976 addressed the issue of adopted adults who were similarly unable to access information about their birth mothers. Under the provisions of this Act, adopted adults were able to access their original birth certificates after receiving counselling to help them understand the potential impact of contacting their birth mother. They were advised to use an intermediary if they decided to trace their birth mother to give her the opportunity to reflect and indicate her wishes. This legislation was extended to include the situation of former Foundling Hospital pupils who were now adults. Coram staff undertook counselling for them and helped trace and counsel their birth mothers. Many former pupils were able to make contact with their birth mothers as a result of this. Even when this was not possible, Coram was able to use its records to provide a history of their mother’s circumstances. This helped fill in gaps and build a more complete sense of identity for many of these adults.

The end of institutional care

Education and the Foundling Hospital

The creation of the Foundling Hospital