Home Explore Article Charlie Chaplin and the story of care

Charlie Chaplin and the story of care

2021 marks 100 years since Charlie Chaplin directed and starred in The Kid, a feature film echoing his own difficult childhood years.

Released on 6th February 1921, in its short 52 minutes The Kid relates an eternal story, captures a personal experience and is an immutable symbol in the story of care. 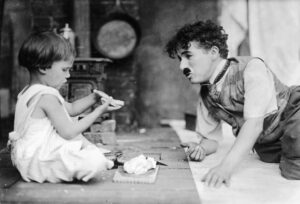 A still from The Kid

Born in South London in April 1889 to parents in the creative industry, Charles Spencer Chaplin’s introduction to life was one of destitution and hardship. The premature death of his father and subsequent mental illness of his mother resulted in Chaplin being sent to various London workhouses and schools from the age of seven. Chaplin described his experiences in Lambeth Workhouse and the Central London District school for paupers as a ‘forlorn existence’.

Though Chaplin was briefly reunited with his mother in 1898, illness forced her to readmit her family to the workhouse in July 1898. Chaplin’s acceptance of his ‘poor mother’s fate’ and constant admissions to various state institutions, makes his eventual trajectory to worldwide icon even more impressive. 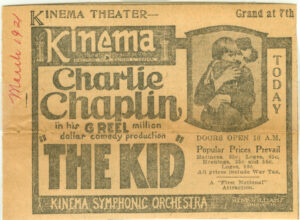 An original ticket stub from the release of The Kid

The clearly autobiographical elements of The Kid remain resonant today as the film follows The Tramp caring for an orphan child and highlights key contemporary notions of single parenthood, paternity, maternity and the involvement of state institutions in caregiving.

When Thomas Coram’s established the Foundling Hospital in 1739, these dilemmas were at its core, seeking to secure a future for parents and children. Women such as ‘The Mother’ presented in Chaplin’s film, confronted by desperation and destitution, would bring their children to the Foundling Hospital. These children were not orphans at all in most cases, but were left by mothers unable to take care of them due to external circumstances.

They left their child to the care of others, hoping this would provide them with a better future. The child would be safe, cared for and educated, and the mother, could gain employment and return should her circumstances change. These age-old notions of providing for the most vulnerable in our society continue to drive Coram’s work today.